"PLEASE READ THE FOLLOWING CAREFULLY BEFORE SCROLLING DOWN TO THE END OF THIS PAGE TO MAKE YOUR SELECTION:
Before continuing, you need to represent and warrant that you or the institution you represent are a Qualified Investor, which is either a “Qualified Purchaser” within the meaning of Title 15 U.S.C. Chapter 2D, Sub Chapter I, Section 80a-2(a)(51), or a “accredited investor” within the meaning of Rule 501 of Regulation D under the U.S. Securities Act of 1933, or a Professional Investor Under Cap 571 of Hong Kong "Securities & Futures Ordinance" Schedule 1, each as amended, or a person or entity who meets certain eligibility qualifications based upon your country of residence.
Information posted on this website is not advertisement, and is neither an offer to sell nor a solicitation of any offer to buy any financial instrument or shares in any fund advised by Minority Asset Management (“Minority”). Any offering is made only pursuant to the relevant information memorandum, together with the current financial statements of the relevant fund, if available, and the relevant subscription application, all of which must be read in their entirety. Past performance of a fund is no guarantee as to its performance in the future.
The funds and securities that are mentioned in this website have not been registered or qualified with, nor approved or disapproved by, The Securities and Futures Commission (SFC), the U.S. Securities and Exchange Commission (SEC), or any other regulatory authority, nor has any regulatory authority passed upon the accuracy or adequacy of any information that has been or will be provided.
Under all applicable laws, the information contained in this website is not intended to and does not constitute, and no person shall rely upon any such information as constituting investment advice and Minority Asset Management shall not be considered a “fiduciary” of any person by virtue of Minority Asset Management shall not form the primary basis of any investment decision. It is your responsibility to independently confirm the information contained herein and obtain any other information deemed relevant to any investment decision.
An investment in a fund or a security involves a significant degree of risk, which each prospective investor must carefully consider before subscribing to purchase an interest in such a fund or security. Investors should not invest in a fund, security, or open a managed account unless they are able and prepared to bear the risk of investment losses, including the potential loss of their entire investment. Investors should seek financial advice regarding the appropriateness of investing in any securities or investment strategies discussed or recommended in this website and should understand that statements regarding future prospects may not be realized. Investors should note that income from such securities may fluctuate and that each security's price or value may rise or fall. Accordingly, investors may receive back less than originally invested. Past performance is not indicative of future performance.

By select "Accept" button, you represent and warrant that you (or the institution you represent) are a Qualified Investor as defined above,and you agree to abide by all the terms and rules in this pages .

Minority AM Liam Zhou: We Believe the Current Strategy Is Still Effective

We still focus on “selecting large blue chips, meanwhile actively participating in IPO placement”. Our strategy remains the same since 2nd half of 2016 because we believe it is an investment strategy with good risk-return ratio.

The chart below clearly illustrates the risk-return ratio between value and growth stocks. The red line is the PE ratio of value stock index, and the blue line is for growth stock index. The value stock PE multiple has been almost flat over the last couple of years, staying around 10 times. Whereas the growth stock valuation has increased rapidly in the past two years.

Some of our investors may have noticed that the value stock prices also increased in the past few years, but valuation seems not change much. This is because the stock price was driven by growth of net profit rather than valuation. It proves that our strategy is more sustainable since the large part of the performance is not attributed to higher valuation which will inevitably accumulates more risks.

Good investment is not just about chasing the highest returns, but need to focus on risk-return assessment. Over the past two years, valuations of large growth stocks have nearly doubled from less than 20 to more than 40 times PE multiple. The risk, in fact, is mounting.

Although the performance of large blue chips is not very eye-catching last year, they will eventually produce good returns, because the high risk-return ratio will show its advantage, so will our strategy. 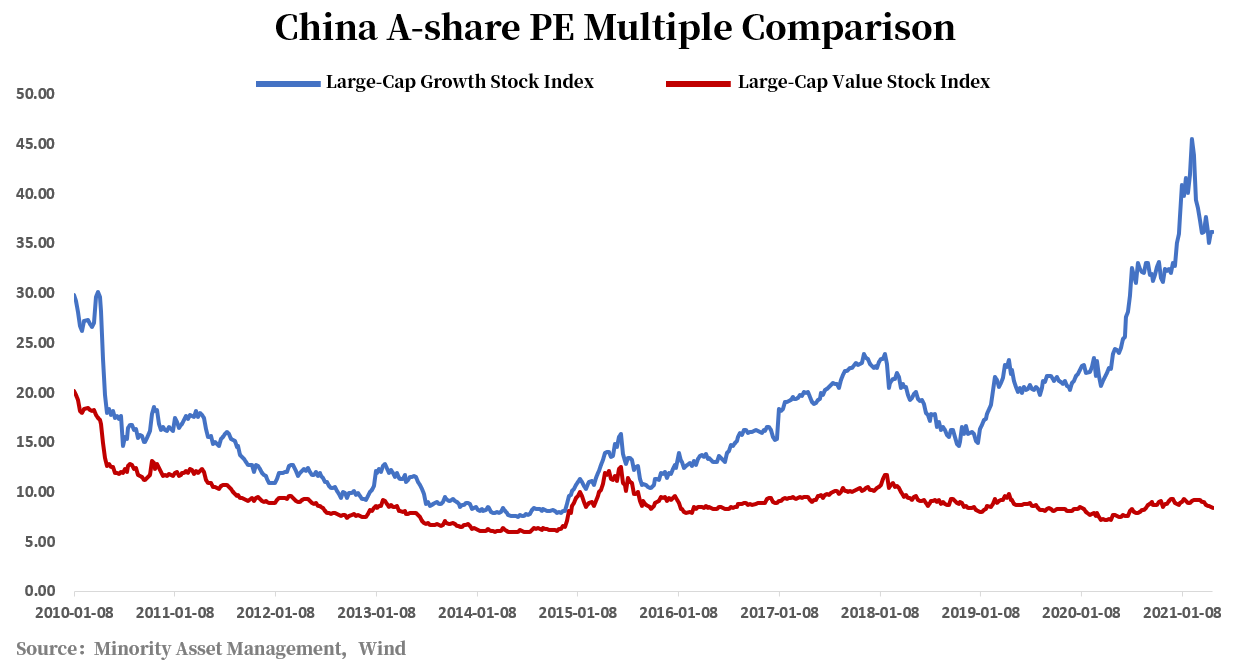 Although Chinese banks profits were affected by the pandemic last year, the net profit growth rate of banks decreased by 10% on average in 2020 H1. Banks began to recover slowly in 2020 H2. The total net profit of the sector in FY2020 is about the same as  2019.

In the past few years, Chinese bank’s profitability dragged by the efforts to absorbing historical non-performing loans. However, we are glad to see the growth rate of net profit started to pick up this year. From the 2021 Q1 results, some of the joint-stock banks, began to show double-digit growth. Although big state-owned banks haven’t released their reports yet, we believe they would have single-digit growth. In our assessment, Chinese banks passed turning point during 2016-2017 where non-performing loan has reached its peak and net profit growth will gradually move up, and valuation would rise too.

That’s why we still hold Banks, because the risk-return ratio is appealing.

The net profit growth rate of eight major Real Estate developers is 5.6% in 2020, which is lower than previous years. It’s not because recent strict government policies blocked housing demand. The key reason lies in 2017 when land market was hot and land price was high, the high land cost was reflected in 2020 financial reports, while the sale’s price capped in major cities also has impact on their profitability.

Since the government policy doesn’t seem to ease soon, developers are taking sale’s price cap into consideration when acquiring new land, which brings gross profit margin back to original/pre-policy level. We expect the profit growth rate return to above 10% level in coming years. On the other hand, the market gives developers a valuation of 5-6 times PE multiple. In our view, Chinese leading developers present good investment opportunities.